What’s happening at our Serbian office?

Activities in Serbia
Developers from Serbia had a noticeable part in building the Infrakit brand since the early beginnings of the company. We will fill this blog post with a triptych of subjects regarding our Belgrade office.

Marketing and educational activities in Serbia took their peak in the year of 2016. The Finnish embassy was kind enough to let us make use of the residence space to gather the creme of the Serbian civil engineering community. Invitations were sent out and in our attendance we had ministers of the state, representatives of the domestic and foreign construction companies, surveyors, members of the chamber of engineers, academics. The topic was presentation of the future technologies in the Civil Engineering, which, as you know, Infrakit is a forerunner in. We wish to thank His Excellency Mr. Pertti Ikonen and his team one more time, and also Mr. Nenad Tepavac who was our sales manager in that period. Read about the event from here. 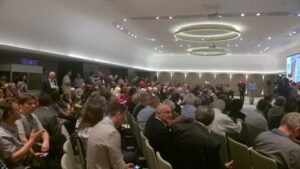 One of the guest lecturers on our February event at the Embassy was our important associate, professor Dr. Gavran from the Construction faculty in Belgrade. His fame and experience in the field is topped only by GMC AutoCAD add-on that he developed, which is used in designing phase of many important construction projects in many countries. The second event took place after we were honoured by invitation from professor Gavran to present Infrakit software to the top students in a class at the University.

The last major event was our participation at the 2nd International Civil Engineering Congress at the Crown Plaza hotel in Belgrade. The event was opened by Serbian Minister of Construction, Transport and Infrastructure. Our presentation, which was worth certain amount of academic points, involved case study about one of the pioneering Infrakit projects in Finland and is co-authored by our CEO Mr. Teemu Kivimäki. 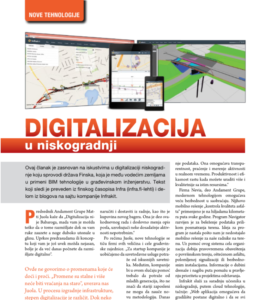 In other news, we had private meetings with many domestic construction, quality control and related companies (such as state railways), and published a few articles like those in the Adriatic area Civil Engineering Almanac named Put Plus. We concluded that the digital awareness in this Serbian sector is just not yet ready for such innovations, but we will be ready when that happens. DCS Finland efforts are currently focused on the more developed markets where the sales and marketing teams are doing a wonderful job in broadening our user base. However, we became a talk of the town across the industry and if any technological or scientific problem occurs in the future work of Infrakit, we will certainly have exceptional help from our friends in Serbia.

Serbia has been country of choice for many foreign IT companies for years. Its proven educational system in natural sciences field and affordable services make a ratio which attracts many IT companies for outsourcing, offshoring or near-shoring, you name it, kind of business model. For instance, Belgrade is one of few cities where Microsoft found home to it’s Development Center offices. The other proud example is the High School of Mathematics, which is renowned worldwide for it’s students who are seldom returning from the Mathematical Olympiad without golden medals. The truth is that many students are leaving the country, but also many are staying because of the opportunities in the IT field.

Let us not ignore the domestic companies which left huge impact on the IT scene. Top Eleven, the manager game that came out of Nordeus is played by million of players on a daily basis. Devana technologies, which produced the most popular WordPress managing platform, was acquired by worlds biggest Internet domain name registrar company GoDaddy a couple of months ago, thus making that company’s debut in Europe.

In the past months the government has noticed the great potential of the IT sector. The state promised a plan of benefits for the IT companies and startups, which should only lead to more favourable connection between the offices. Also, there is more than one NGO which is involved in the scene in very positive way, like hosting free or paid events and lectures.

That leads us to the recruitment of new software engineers. Similar to Finland, the demand for the coders has skyrocketed and the typical strategy of the IT companies is to offer internships and hunt pre- or post-graduate students. It has never been the better time to be a software engineer student in a business environment which didn’t exist ten or more years ago. Infrakit is lucky to have great coders with a degree in its Serbian office, and this small team already have had the pleasure to welcome in its rows some of the now very successful IT individuals. Aleksandra is now the producer of the Mad Head Games, Milan has his own 50+ people IT software engineering outsourcing company, and David who excelled 3D module to the current standard in his freshman year, got an internship at Microsoft. 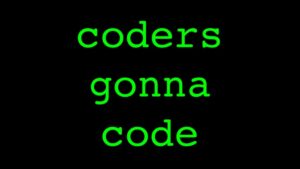 The author of this blog post, Ognjen Popović, is also the contributing author to the oldest Serbian computer magazine, which got its fame during the time of Yugoslavia. He is often attending domestic and international IT events, like the Voxxed days which was held in the Belgrade last year, and is also a member of jury in a competition held by Computer Science Faculty in Serbia, which happens to be the place where most of our coders came from.

Lastly, let us mention the growing culture of IT meetups (entrepreneurs, developers, startups), where people from across the industry gather to promenade, share knowledge and network together. I think it is safe to conclude that we are in the right place to offer future work positions both for internships and senior coders as our company expands. Of course, everything in coordination with the band of coders come from the home offices in Finland.

The author of the article is currently mainly developing Infrakit App for iOS Devices, which might be a good topic for blog post.