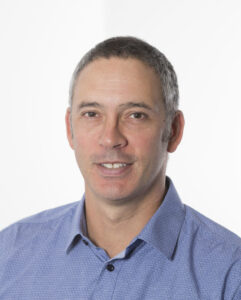 Tim Barry is an infrastructure specialist with over 20 years of international experience working and consulting in environmental infrastructure, in private and public utilities and for EPCM contractors. Currently, he works as an Interface Manager at Watercare, encouraging outcome focused engagement with other major projects in Auckland. In our conversation with him, we discussed how the industry has changed and developed in the last decade and what challenges it might face in the future.

Background and experience in the industry

I’ve been in this industry or related fields since graduating in the 1990’s and I’ve been back in New Zealand for seven years, in that time overseas I’ve been based in the UK, the People’s Republic of China and Australia.

My first start on the Anglian Water graduate program came from a New Zealand water resources paper I submitted as an undergraduate to a joint IPENZ / Anglian Water award and was awarded a placement on the 3-year graduate program of the privatized UK utility. This was a great start for understanding the sector as the program emphasized a broad experience platform moving us around various business placements, some of which were unique for an engineer. I maintain a close association with Anglian Water, even spending a week with them last year.

On completion of the program, I moved with Anglian’s international division to Beijing, China where we were looking to expand our non-regulated businesses. There, business accelerated, and I worked on the world’s largest water industry tender, which we eventually won and pursued utility acquisitions in over 10 provinces. After several years I switched to Shanghai and the ultra-competitive EPC market serving the world’s largest industrial workshop in the Yangtze delta. We served foreign owned industrial customers providing bespoke water and wastewater systems. I managed a full EPC team of about 40 delivering about 10 diverse projects annually. I took up an opportunity to move to Australia, also in EPC management and commercial roles.

Most of my experience has been in the industrial or municipal water systems. The last seven years with Watercare has transitioned from complex process-based projects to front ending large linear transmission ones, it’s been great for adding that experience.

Probably the biggest difference is the fourth industrial revolution. The fact that data and digital technology is now a thing. That’s got to be one of the biggest ones, also now we’re carbon focused. We’re trying to be sustainable, and we’re trying to chop the emitted carbon out of what we’re building and operating.

With respect to digital technology. We’re looking to benefit from generated data for the entire life of our assets, so basically having a relatively up-to-date live model, ultimately a “digital twin” of the hi-touch, critical assets and maintaining that digital relationship with those critical assets for their working life.

Typically, the bulk of our work and services are pipes and squeezing another ten, twenty or thirty years out of the life cycle would be huge for the balance sheet and a change for the business overall. We’ve got tens of thousands of kilometers of pipes. So, data is important. Carbon goals are also empowering our employees to act on initiatives.

Health and safety have improved as well. Particularly in New Zealand where historically it has lagged compared to other similar countries. For example, my experience with Anglian Water in the late 90s. They were already relatively advanced.

What we have with carbon is a three-pronged approach that’s working well.

Firstly, we have a sustainability strategy, that’s been embedded for over a year now at Watercare. It states very clearly what our purposes are, our responsibilities to the living environment and how we go about engaging with our decision process. This sets the scene.

The third prong is how we’re engaging our supply chain for longer-term delivery of assets, where we’ve developed what we call the ‘enterprise model’, which is unique in New Zealand. It’s a capital pipeline of two and a half billion dollars’ worth of work for the next decade, awarded to a set of contractors. Engaged for the duration as partners, they can help us deliver the 40/20/20 targets by being more strategic and engaged with the sustainability strategy.

An example of this is concrete suppliers. Concrete is our largest carbon input by some margin. Yet we have never had a close relationship with the producers, and they would not embody our goals. Instead, like most other large clients we’ve always engaged a contractor who have gone with the lowest cost on concrete. Now, through the enterprise model we engage directly to the ‘shop floor ‘of those vendors to align our strategy and goals. That’s something we’ve never been able to do, and this holds a huge potential. We are targeting a 60% reduction in carbon.

Global exemplars in carbon reduction demonstrate that the largest gains are found through reducing the degrees of separation with their value chain. And the cohesive strength of everyone working towards the same goals.

Also important is setting transformational goals. A 10% improvement is easy to achieve and doesn’t necessarily prompt any real change, but a 40% change forces you to totally rethink things, retool and transform the business.

We also benefited from Anglian Water who set their carbon targets in 2010, so we benefit from a decade of experience. So, it’s not as if we’re doing some of these things for the first time. We get to look around the world and see what we can adapt effectively to the New Zealand situation. We’re different, we’ve got a different environment, different geography, systems, but there’s a lot in common that we can pick up.

That’s how we’re looking to make some easy, early wins on carbon in the next few years. In the longer-term it will probably be a case of diminishing returns. We’ll have to get far more granular.

“We won’t be looking at concrete, we’ll be looking at building practices, right down to some of the technologies that Infrakit offer.”

Biggest changes when considering the digital revolution, the carbon footprint and sustainability

A lot of our biggest changes in the future will revolve around customers and our relationship with them. What structured information does is it provides a more accessible stream of knowledge, that’s traditionally only available for limited people. That information can now be shared and viewed by the public so that with this drought that Auckland has been suffering from, we are able to engage our customers much closer than in the past. They are better informed than ever.

An example is the webpage illustrating our dam levels, which has traditionally been ‘unknowable’ information. So, the general public has not had this insight, but now if I go to my neighbors, they are quoting me the consolidated storage percentage. They never would’ve known this information before.

That’s just an example of how the public can be much more informed now. It also demonstrates the importance of credibility and trust, so we must share information whether it’s good, bad, or ugly or even if it reflects imperfectly on us because if we don’t, we will lose the confidence of our customers. And without that, the ability to drive other critical or controversial decisions, that would be a problem and a risk to a utility. Trust is needed for the hard calls.

In the past we’ve made decisions that have generally been sound, but behind closed doors by a collection of engineers and managers. That’s not going to happen exactly like that in the future, so I think that’s a major change. We need to have those relationships and discussions with our community, as the data is there for others to see.

The biggest change in the next 15 to 20 years is encompassing the need to convince people on a wider level than we’ve had to before.

Information flow to the public and vice versa

I think the idea of a fully functioning digital twin, is still a long way off. The fact that information is flowing, and it needs to certain areas is that you’re not going to be able to control it. There’s certain value in learning what you’ve shared, it’s cost effective too. People will have extra information, it’s an important relationship.

“Trust is the currency of the future.”

I know there isn’t a meter for trust but if there was then that’s what the leaders of the future would be interested in keeping an eye on. If you don’t have trust, then what do you have?