CASE: The City of Hyvinkää – First Stage of the Hangonsilta Project

The first stage of the project was to clean the contaminated soil and prepare the area for residential construction. Infrakit was used in the project, and the biggest benefits of using the service were gained in monitoring project progress in an online map view and minimizing environmental risks.

The Hangonsilta area is an old railway yard that was last used for its original purpose in the 80s. After the 80s, there has been many types of activity in the area including car repair shops and warehouses. The city of Hyvinkää started negotiating purchasing the land from the state in the early 90s and the purchase was finally agreed upon in the early 2000s with the condition that the city assumes responsibility for cleaning the land. Future plans for the area were being made in collaboration with the Finnish Transport Agency and the exact line between the residential area and the railway yard was agreed upon.

The main concerns that came up during planning regarding design and municipal engineering had to do with the challenges caused by the contaminated soil. Hangonsilta is a pool-like area located in an esker, and the bottom-most layer of it consists of a gravel esker containing ground water. On top of the gravel esker is a water-holding layer of silt. Due to vegetation growth over the years, a layer of peat had formed on top of the silt layer, and the railway activity in the area had partly spoiled the perched groundwater of the peat layer. The critical goal of the project was to make sure the contaminated perched groundwater wouldn’t contaminate the clean groundwater. The matter was discussed with the Centre for Economic Development, Transport and the Environment (ELY centre) and more advanced building techniques were sought to overcome the challenges. The project was under strict surveillance and several permits were required, so comprehensive documentation was necessary. In addition, completing the project successfully was also deemed important for the image of the city of Hyvinkää. The area’s reputation would’ve suffered had something gone wrong.

Infrakit made it possible to collect detailed documentation of the processes of removing the peat and replacing the land mass. Due to the environmental challenges, it was crucial that every action, including digging depths, were recorded. The documentation also served as proof for the ELY centre that the silt layer remained untouched and the groundwater uncontaminated.

Contaminated soil replacement work was procured by the city from private contractors. In this stage Infrakit was used to share the design data as models to the contractors project managers and further to surveyors and machine control systems. City could monitor project progress and quality in real time on map view. 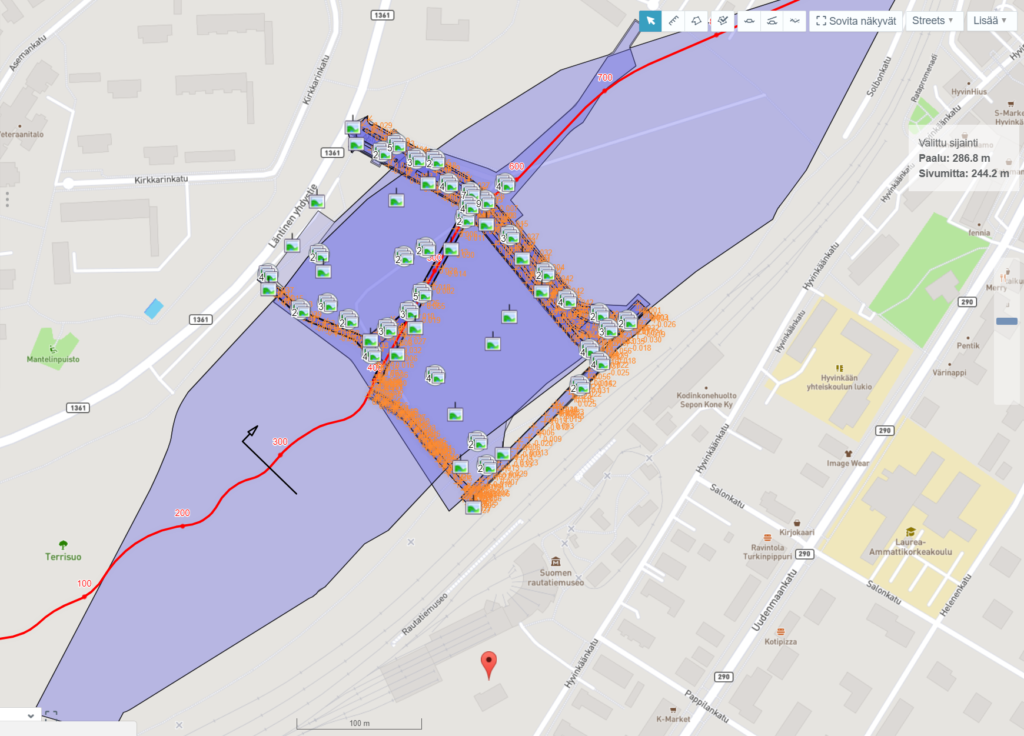 The first stage of the project in the Infrakit application

Jouni Mattsson mentions as the most important benefit gained with Infrakit the efficient progress monitoring: ‘Monitoring project progress was really efficient through The Infrakit cloud service’. Through Infrakit, it was possible to document data that would be available later if any questions or doubts arose. Now there’s clear documentation of the completed work and it’s easy to share with third parties as well.

We used to live in a so called 2D world where design maps were carried to the construction sites. Based on these maps the surveyors would place sticks on the site according to the designs. After the transition to the 3D world, the designs are in 3D making them much easier to apply in practice. The machines have their own machine control systems, allowing the surveyors to focus on more demanding tasks. The transition to digital building has changed working on construction sites as the background processes have changed. Mattsson has also been surprised by how much digitalization has increased efficiency in construction. One good example is how design updates can be immediately applied and no older versions are left to mix things up. Mattsson explains how in the old world you could never be certain that the contractor had the newest version of the project instead of the old one. ‘For example, a few times someone’s built according to the older version despite the updates, and that’s difficult to fix afterwards’.

Would you recommend Infrakit to other organizations?

‘Yes, I would recommend Infrakit to organizations that want to change their work method and processes towards utilizing BIM’. Mattsson also hopes that as digitalization becomes more common in construction, the systems used by maintenance would also follow this trend.