“This project, Suoniitynkatu, is a 450-meter-long residential street project that also includes water supply construction,” tells Petri Honkanen, Surveying Chief of Lahti. “One of the most challenging things about this project is to speed up the construction process. Suoniitynkatu is a ribbon-like street so it is quite difficult to create alternate routes among already existing structure. Luckily, we have been successful in organising that for the residents.”

“We run on a tight schedule with this project. We started on July 1st and the street must be nearly done on September 1st so that you can drive into plots using it. The final deadline for the project and paperwork is on October 1st.” 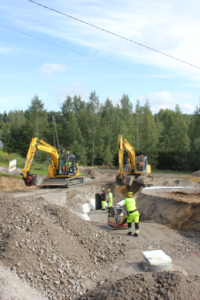 “The project manager has a lot to do in different projects. At the moment one of the project managers has around 40 projects on his desk. In practice, the large amount of work has resulted in decreased time to be allocated for supervising different work phases. For example, while supervising the project, and not acknowledging and approving one small detail, might arise some discussion for the reason of the mistake”, Honkanen enlightens.

“Infrakit releases a large percentage of the project managers’ time so that the earlier mentioned mistakes can be completely avoided. In the bigger picture BIM designing and construction – and Infrakit in addition to those – are an entity in which I can’t see anything but positives.”

“On this Suoniitynkatu project there are two machines with Novatron’s 3D machine control system in use. We can see the exact location of the machines and which design model is active. I was just at the office watching from Infrakit these machines work on pipe trench on a different location.” 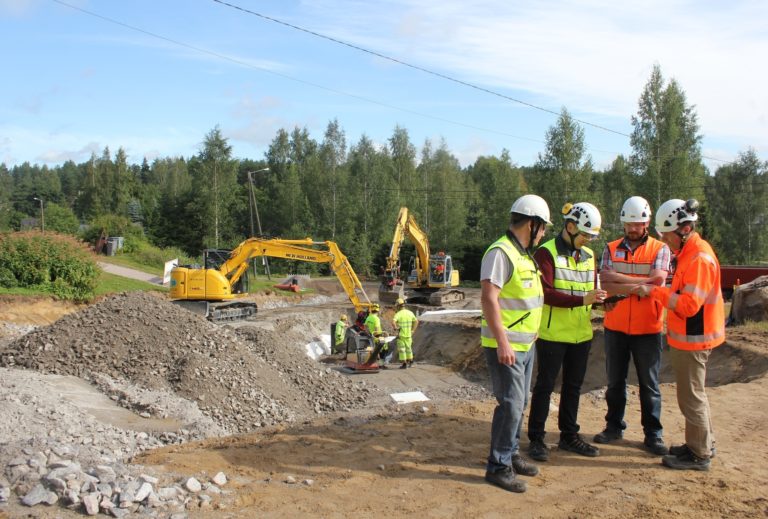 Viewing designs and as-builts on the site

“When project staff has many on-going projects and worksites and – in addition – many different roles, Infrakit’s openness helps them work. The fact that from Infrakit you can view in real-time which work phase is in progress and what are the as-builts, has been extremely valuable for us. With the help of model-based construction and Infrakit – when first agreed on and everything is done by the contract – you can really create a true feeling of cooperation for the project that is open to all parties.”

“With the help of Infrakit, you can really enhance supervising the project. The software gives a really good tool for it and frees up time that was previously used supervising for other tasks, too.”

“I’m used to using Android-based applications, so learning how to use Infrakit has been easy”, tells Henry Romppanen, Project Manager of TL-Infra Ltd. “When visiting the worksite to supervise, I take photos with my tablet and view designs directly from Infrakit.”

Petri Honkanen continues: “The photo feature of Infrakit – photos are tied to the specific coordinates where they were taken – emphasizes the openness and clarifies things for possible further discussions. Geo-referred pictures that Romppanen and the contractor have been taking help to clarify the exact locations of, for example, the pipeline joints.”

“If you notice something unexpected in the photo, you can locate the error in the terrain later with the use of specific coordinates. Before Infrakit, you might have needed to only guess the location. Photos were taken then as well as now, but the location of the picture where it was taken was difficult to remember out of hundreds of other photos, and the processes were not as transparent as they are now. If you would want to describe Infrakit with one word, it would be simple.” 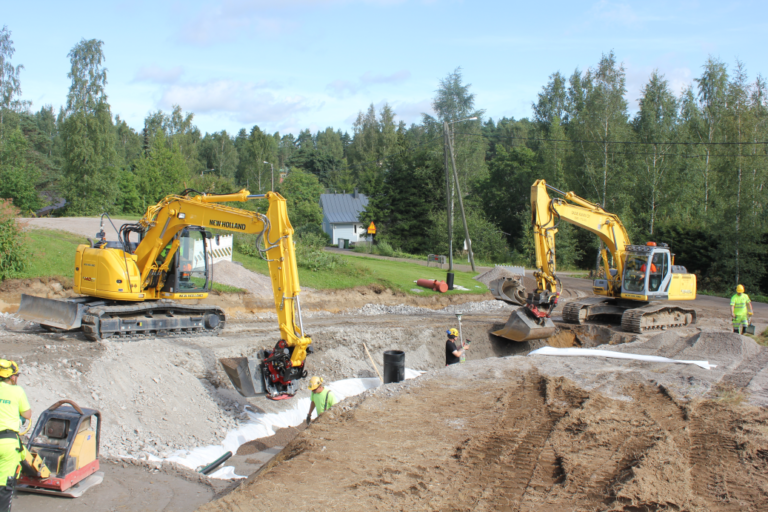 Project is implemented on BIM, so it will be finished as designed

“The model was shared to contractors at the tendering stage through Infrakit. Previously the major price differences in contracts were formed from how well the contractor had calculated the masses of structural layers. Now the design model is available for everyone and the calculation is always based on the same design model.”

“The facts that project owners are interested in: for example, the as-builts of the structural layers. Before Infrakit, when the data came to me, there were about 500 points, and finding the points exceeding tolerance took a lot of time.”

“Previously you needed to compare the as-builts to the design manually from time to time. Now, when viewing the as-builts from Infrakit, the accuracy has been excellent – the difference between the design and as-builts has only been one or two centimetres. The project owner’s own measurements supported this achieved accuracy.”

“Yes, I would – and actually, I have recommended it. It is easy on these grounds: the project progress becomes open and transparent and work time is used more efficiently than before.”

“I don’t see any other options on how infrastructure projects will be done in the future: a combination where worksites operate with machine control and site management systems like Infrakit. There aren’t any other ways to complete infra-projects. This is the Way of working with a capital W. I can’t think of it any other way.”