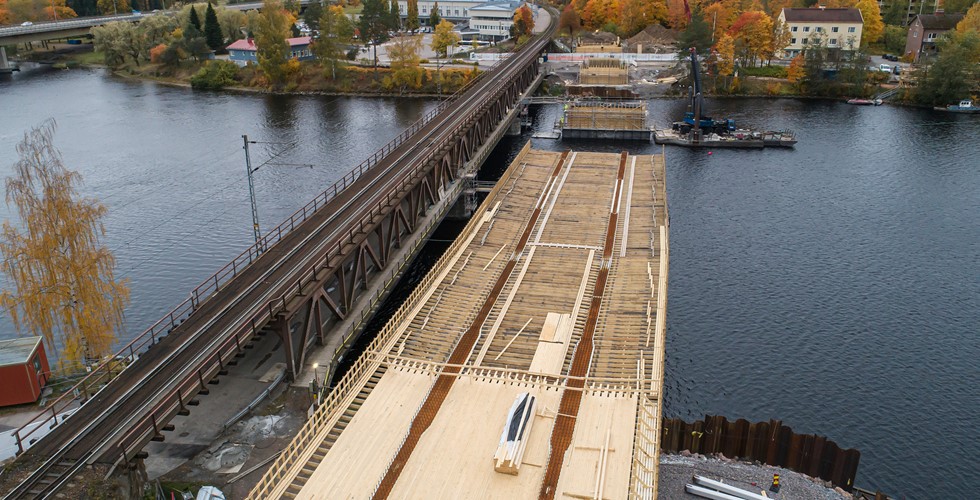 In infrastructure construction, information is increasingly being presented in the form of building information models (BIMs) rather than paper drawings. NRC Group uses BIMs in a variety of construction projects, significantly improving quality and productivity.

In practice, this can be seen in the increasing numbers of Finnish Transport Infrastructure Agency projects being completed — from planning to implementation — on the basis of BIMs. A good example of such a project is the improvement of the Pasila–Riihimäki track, in which the customer has reported savings of up to millions of euros with the help of BIMs: building information modelling provides a more accurate picture of what is being done and enables smart planning of work phases between multiple actors.

“Different programs can be used to visualize and analyze plans presented as building information models. Such models provide key information that can be used in the planning, implementation and reporting of a construction project,” says Jussi Heikkilä, BIM Production Manager. Heikkilä is responsible for the development and implementation of BIM-based construction at NRC Group Finland.

“BIMs provide a more detailed picture and calculations during the bidding and planning phases. With a mobile device, BIMs and other digital material can also be used during familiarization with sites in the field,” Heikkilä explains.

During the implementation phase, BIMs are primarily used for machine control (a feature of BIM-based construction) when creating earthworks. NRC uses this approach for all major projects. With the Infrakit tool, supervisors can monitor in real time what machine-controlled machinery is doing, and supervise the quality of work in relation to the plans. If the plans change, the machinery can be quickly updated accordingly. A faster response reduces construction delays and improves resource allocation: machinery utilization rates have increased as a result of BIM-based construction.

In fact, BIM has clear connections with the lean philosophy and goal of continuous improvement.

“BIM enables the realization of lean principles and continuous improvement in practice. It eliminates delays, waiting time and waste. It also makes work safer and more meaningful, as building information models provide better and more accurate plans for construction work. This means fewer surprises and conflicts between plans, and the implementation of projects as intended. So the right things are done in the right place at the right time.”

Building information models have been used in a number of ways at NRC Group, for example in the Mansikkakoski bridge project in Imatra, involving the construction of a new railway bridge over the Vuoksi river. BIMs have been used to check space reservations and ensure that a new bridge can be built across the Vuoksi as proposed by the designer. A combined model was used to ensure that the structures are compatible, and for clash detection.

“The overall project is much easier to visualize with a combined model, which facilitates the planning of work,” says Tiina Frilander, BIM Operator. 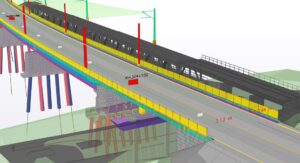 Picture: Finnish Transport Infrastructure Agency’s Mansikkakoski project/combined model of building plan
BIMs have also been used from the very start of the Kototolahti yard track extension project. Almost all construction — from cable routes to implementation of the track ballast layer — has been carried out on the basis of machine control models.

“Even during installation of track markings, done as additional work during the contract, we used machine control and the Infrakit application as a tool to ensure successful and precise installation,” says Samu Simonen, Project Manager.

Infrakit is the main tool used for BIM-based construction in both the Kotolahti and Mansikkakoski projects.

“BIM material and other construction data with coordinate information were exported to the Infrakit system during the Mansikkakoski project. Machine-controlled machinery, into which the BIM and construction material were wirelessly installed, was also connected to the system,” Frilander explains.

Information management is markedly eased by Infrakit, which enables the import of various documents and plans into the same tool. For example, Infrakit can be used to connect terrain photographs directly to the correct locations, easing overall project management. 360-degree panoramas and aerial photographs taken with drones were introduced last year. Drone images have been taken at different stages of the Kotolahti and Mansikkakoski projects, enabling easy monitoring and reporting of progress.

“Imaging material has also been used for the planning of work stages. The situation on the ground can be perceived in much more detail from a bird’s eye view,” says Simonen. 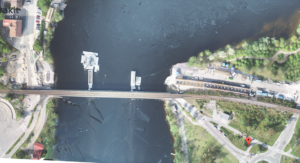 A drone orthophoto of the Mansikkakoski project

BIM-based construction has increasingly been used in non-construction work where, instead of three-dimensional BIMs, the most usable options are point cloud data concerning objects to be built or installed, or location-based digital project maps. In electrical construction projects, both supervisors and installation engineers use the Infrakit application, in which location-based project maps created using different technologies help supervisors to understand what is being built and ensure the feasibility of plans. At best, on a construction site installation engineers can use a mobile device with a separate GNSS receiver to view equipment installation locations with centimeter precision, without marking or measuring the terrain. The locations of installed structures can be documented immediately to enable the monitoring of progress and for the handover material.

Continuous documentation of the progress of projects is also useful after their completion, since handover material is increasingly being provided to customers in digital format. Handover material is used to verify the quality of construction. Digital material is also easier to transfer to different systems, where information needed for care and maintenance needs in relation to construction projects can be found and used years later.

“The imagination is the only limit to the possible applications of BIM. Information management is the core around which everything else forms,” sums up Heikkilä.

This article was originally published on NRC group’s website in Finnish. View the original article here.