European BIM Summit – the annual international conference on Building Information Modeling (BIM), is held for the fifth time in Barcelona ( 11-12 of April). The conference has become the most advanced reference meeting on construction digitalization in Europe. The event started with a gala dinner at Roca Gallery that was organized by the Col·legi d’Aparelladors de Barcelona (CAATEEB), BIM Academy and buildingSMART. 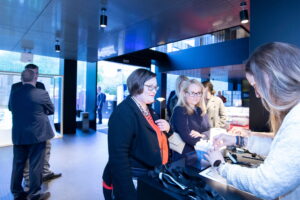 Coordinator for buildingSmart in Finland Anna-Riitta Kallinen (in red) cheks in dinner at Roca Gallery in Barcelona (Photo: Marc Escola) 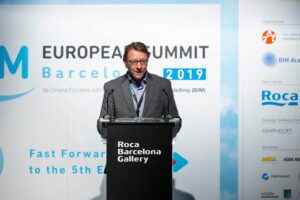 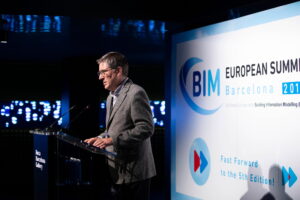 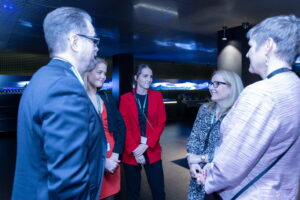 Massimo Rubino (in the middle) has an active role in advancing the use of BIM in Spain, especially in Catalonia. He is one of the organizers of the European BIM Summit and also works with BIMtour. BIMtour has held 15 sessions with more than 900 professionals in Spain from November to March in 2019. The sessions will show to the the professionals involved and the attending institutions how the BIM implementation will provide to their project and process higher productivity and efficiency. The purpose of the tour is to help people and companies to keep up with digitalization in construction industry. The gap between companies using the new technologies and companies using traditional methods is expanding. Read more about the European BIM Summit here, and BIMtour (in Spanish) here. 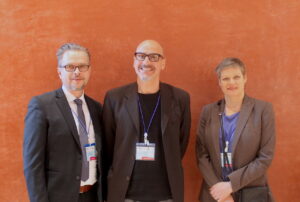 Marja-Liisa Ketola from Inseltrade has started to work with Infrakit in Spain. She has started with a market survey on trends and mobile connectivity focusing on motorways, railways, ports and airports. Ketola is actively looking for potential customers in Spain.

Petteri Palviainen, BIM Development Manager from Novatron got involved with BIM Summit Barcelona through InfraBIM Open event in Tampere. Here in Barcelona he explained to the international audience the Finnish way of using BIM (FINBIM) in infrastructure. As a case example Palviainen told about the tramway project in the city of Tampere. The new 23 km tramway is built by a tramway alliance which consist of the client i.e. Tampere city and the service providers, i.e. NCR Group Oy, YIT Construction Services and Pöyry Finland Oy. Infrakit is used in the project as a platform for managing machine control models and as-built information as well as digital handover material. 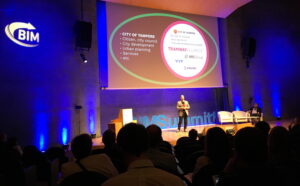 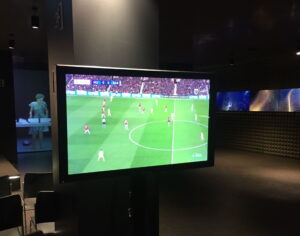 An important game was shown at the gala dinner, only in Spain!

The founder and CEO of European BIM Summit, Ingasi Pérez Arnal promised: “Next year one third of the event will be dedicated for infrastructure”. We look forward to it!